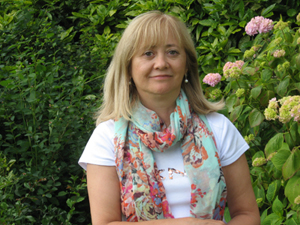 Mercedes Aguirre is a scholar who works on Greek mythology. She is also a writer of novels and short stories.

As a university teacher her areas of published research (in both Spanish and English) are: Greek literature, Greek mythology and iconography, and the reception of Greek mythology in the contemporary world. Among her scholarly articles are those on:

She has also authored a book on the Pre-Raphaelites, especially on those of their mythological paintings which focus on female characters.

Listen to Mercedes and Richard  Buxton discuss Cyclopes in Greek Mythology, and their book Cyclops: The Myth and its Cultural History on the Ithaca Bound Podcast, 4th June 2021.

Mercedes is the co-author of a series of books, all published by Ediciones de la Torre, which retell the Greek myths:

She is also the author of several books of fiction which have been inspired by Greek mythology but which are situated in our contemporary world:

Amongst other activites, Mercedes runs workshops and courses on creative writing.

See profile at the Escritores Complutenses in Madrid