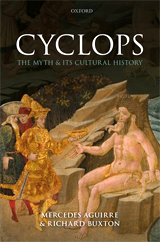 With Richard Buxton: Cyclops. The Myth and its Cultural History

Mercedes and Richard Buxton discuss the book and Cyclopes in Greek Mythology, on the Ithaca Bound Podcast, 4th June 2021.

Part scholarly monograph, part love letter to a monster, this book is an exhaustive account of ancient stories about one-eyed giants, their depiction in classical art, and their reception in the western tradition from antiquity to the twentieth century… As Aguirre and Buxton show in this accessible, learned, and often humorous volume, there is more to this monster than meets the eye… This far-ranging book succeeds admirably in providing readers with a survey of the representation of the Cyclopes in art and literature from antiquity to the present. Historians of myth, monsters, and the reception of classical culture will find many riches in its pages.
Scott Bruce in Bryn Mawr Classical Review. 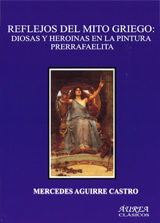 This book resumes the view which the British painters of 19th century, and in particular the so called Pre-Raphaelites, offer of female characters of Greek mythology. Artists such as Dante Gabriel Rossetti, Edward Burne-Jones and characters such as Helen, Medea or Cassandra.